As part of strategy to ensure community inclusiveness and ownership in the “Advocating for the Prevention of Gender Based Violence” Project in Kaduna, AMDF recently visited the District Heads of Kufana and Doka to garner their support.

The project seeks to curb incidences of Gender Based Violence in six Communities each of Kufana and Doka Districts within Kajuru and Kaduna North Local Government Areas in Kaduna State through a rural response strategy.

Receiving the team at his palace in Kufana, District Head of Kufana in Kajuru Local Government, His Highness, Titus Dauda, together with his Village Heads committed to support the team to ensure their communities are well informed and incidence of violence against women and girls is brought to a minimal.

Dauda stated that “women are marginalized and have been worst hit by the crisis recorded in our community in recent times, resulting IDP camps and consequently high cases of sexual gender based violence, hence, the project is timely and necessary as we work towards restoring peace in the district”.

He therefore, promised his community’s full involvement towards the success of the project adding that AMDF has his full support to work in the community.

Also the District Head of Doka, His Highness, Bala Mohammed Tijjani (Bunun Zazzau) commended the idea of having this project executed in his jurisdiction and promised to give the team the maximum support needed.

Introducing the objectives of the project and the basis for selecting the communities, the Project Manager, Benjamin Maigari explained the concept of Gender Based Violence stressing that the prevalence of violence against women and girls, and the stereotypes attached with it warranted the choice of these communities and the need to carry out such projects in their communities.

He said the team will work with Community Based Action Volunteers (COMBAV), a rural response strategy that aims to reduce the incidence of Violence Against Women and Girls (VAWG) within their communities

The project Team also visited the Village Heads of the selected communities (Kufana, Doka, Uguwan Rimi, Gabasawa, Kasuwan Magani, Unguwan Liman, Uguwan Shaban).  They were excited that their communities were chosen and promised to support the project considering its benefits to their communities.

The Village Head of Kasuwan Magani, Mallam Ibrahim Abdullahi who specifically highlighted the issues of GBV in his community decried low level of girls’ education and called for intervention to create awareness and change the tide of early marriage in the community.

The project “Advocating for prevention of Gender Based Violence” is being implemented by Africa Media Development Foundation (AMDF) with support from Rise Up, a project of Public Health Institute (John Hopkins University, USA) 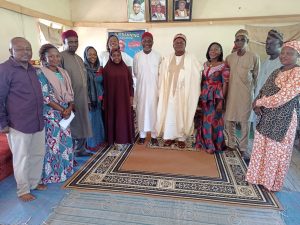